I’ve decided to translate an article I wrote for modnaKasta technical blog since it should be fairly interesting for a wider audience than just Russian-speaking people.

modnakasta.ua is a single page application right now, which uses React internally and is written in ClojureScript. But we care about Google and people experience, which means we certainly care about server-side rendering.

Since the whole front-end is in React, which promises to make app renderable without having access to DOM - in Node.js in particular - the first idea was to render everything using Node.js. Doesn’t feel that fuzzy, does it? Especially given that there is a new shiny super-fast JS engine in Java 8: Nashorn. And first experiments showed that it’s indeed very fast, faster than Node.js.

“That’s great,” I thought and we started building an app (not SSR, an app itself). When the app became at least somewhat usable the time has come for a reality check. Loading our ~2-3k loc application into Nashorn proved difficult: 8 Gb of heap was barely enough to load JS file and after 30 seconds of hard work, it spits “this expression in your JS is invalid” error. Fixing few of those errors (mostly by commenting code) showed that there is no way we could develop with an environment like that.

So the Node.js at last. The architecture was simple: we put compiled JS file inside of API server uber jar, on start write it somewhere, and run Node.js against it. After that communicate with Node via HTTP: proxy user requests there, proxy rendered HTML back.

Because Node.js is single-threaded it’s totally wrong to have a single process - so our API server becomes a process pool manager and a load balancer.

Also, we make a request for data while a component is mounted. Which is fine for the browser, you just wait for a bit, the response comes back and the browser will render that data. But on server user request is already gone: your first version of an “empty” component was already sent to a user because rendering process does not wait for the data to be received.

Which was fixed by making it two-pass renderer: first you rendered to kick off the data gather process, and when all XHR activity stops, app is rendered one more to have full content. That takes around 300 ms on a fairly simple page in optimistic case.

Can’t forget to mention that Node.js also leaked memory. Profilers did not help so I went lazy uwsgi way: made a Node process restart every 1000 requests.

But what won’t you sacrifice for the sake of result? So we’ve got this system in place (not in production yet though) and I went to Philly for Clojure/Conj 2015.

Weirdly I did not plan on attending Allen Rohner’s “Optimizing ClojureScript Apps For Speed” which taught me that descriptions suck. There was nobody in the lobby though so I became bored and went there.

Core idea is following: Clojure 1.7 (came out 5 months before that, in June 2015) gained an ability to have a single .cljc file which can be compiled by both Clojure (which usually lives in .clj files) and ClojureScript (.cljs files). Let’s say this is a React component which renders an image:

Here defc is a macro which transforms the code into React calls. Here’s a result (roughly):

But that’s what macro generates when we compile into JavaScript. What if during execution on JVM (or, in Clojure) it will make this code into a function, returning a string <img src="...">?

I wrote first version of this rendering for Rum back in January 2016, which Nikita (author of Rum) and other contributors developed into a properly working thing. We’ve got a server-side rendering, but without React runtime, in JVM, with synchronous (yay!) network reads, with multithreading: in other words, pure joy!

Synchronous network reads are good because until data from a top-level component is received from the server, inner components (which are dependent on that data) sit there waiting. But right after data is there, inner components are rendered/initialized and start fetching their own data. So the data dependency management here is really simple.

Also, if you render your HTML in the same process your API is running, there is no need to go through network and HTTP. Clojure’s Ring protocol is just a function which accepts a request as an argument, so you can call your whole app with a simple map (which is what request in Ring is) and get response back. XHR looks like that for ClojureScript:

And like that for Clojure (app is our HTTP API):

Of course, real implementations are a bit longer, setting headers, parsing JSON, etc. By the way, there is an interesting story about JSON: right after Black Friday 2016, when our architecture proved to be a success, I was showing to somebody how it works and saw in MiniProfiler that serializing JSON takes quite a bit of time. Obviously parsing is not free as well.

54 lines of changes later and now we pass unserialized data to server rendering: takes less time and less memory (minus string for JSON and minus newly parsed data). Pleasantly, median time for rendering HTML went down from 110 to 80 ms. :)

Also interesting that we have a cheat (or optimization) around caching and user-specific content: everything that depends on a current user is rendered only on a client. It’s a compromise: users see “anonymous” version of a site initially for a few moments, but in exchange, we can cache rendered HTML for everyone. This makes us able to look like we’re not sweating a bit during sharp increases in traffic. :) 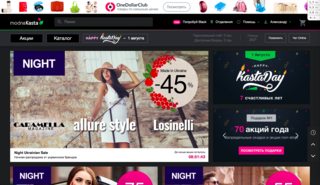 And they lived happily ever after. And you can go to modnakasta.ua by yourself and click around to see how that stuff works. Also, look at the source HTML server gives you, this all is rendered in JVM, with absolutely no JavaScript.
If you like what you read — subscribe to my Twitter, I always post links to new posts there. Or, in case you're an old school person longing for an ancient technology, put a link to my RSS feed in your feed reader (it's actually Atom feed, but who cares).
Jul 2017