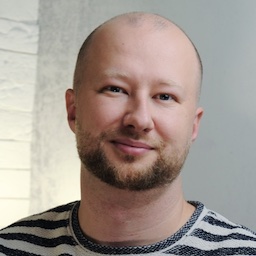 Hey, my name is Alexander Solovyov and I’m an experienced software developer. I enjoy efficient and simple solutions, solving real-world problems and balancing good code quality with timely results. For more than half of my career I’ve been leading teams and results seem to be positive. I pride myself on making wise technology and architecture choices more often than not.

I’m working as a CTO as Kasta, where we’re building best online marketplace in Ukraine. We’ve been a Python shop, but a few years ago successfully migrated to Clojure. Right now, I believe, we’ve built a best technical infrastructure for a full-cycle marketplace here in Ukraine.

Previously I worked on a golf-related fantasy game for How Far Games, a startup which has since sold it’s technologies to bigger players. We’ve been an early adopter of React and it paid off nicely.

Before that I was working at Instant Communication, Malay startup with a goal to provide alternatives to Google ecosystem, so big players (corporations or governments) could host and own data. Startup went nowhere, but frustrations with Backbone.js here led me to investigations of alternatives and ultimately to very successful talk called Coding UI painlessly. I’ve been giving some talks before, but that one gave a real push to my speaking career. :)

A year before InstantCom I’ve spent living in the Netherlands, where I worked at Paylogic. It’s been a great year, I loved the people and the team, the culture of Netherlands and… hated the weather. The weather got under my skin really deep. :) So that was one of the reasons I went back to Ukraine.

Everything prior to that is an ancient history, but I started programming for money in 2007 and before that worked as *nix administrator. I’ve spent quite a bit of time with Linux when living in KPI’s dormitory, so it was natural to start as an admin.

Outside of work I’m a father to a son and a daughter and they are a constant source of delight and frustration alike. :)

If you want to contact me, use my email, it’s alexander@<this-domain>.